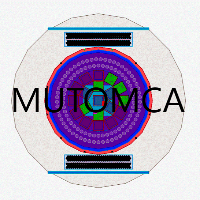 Every second, a shower of muons flows through the atmosphere, crawls through our bodies and through everything it crosses.
Those particle are originated in the stratospheric region of the Earth from the interaction of Cosmic Rays with the highest layers of the atmosphere. Cosmic Rays are mainly composed of H+ and He++  (p and α particles) generated outside out solar system, in the inner regions of our galaxy or coming from extragalactic sources.

Materials with high atomic number (Z) are able to bend the muons trajectory. This phenomenon, known as Coulomb scattering, can be used to determine a relative density three-dimensional map of the volume enclosed by a set of muon trackers. You can learn all the technical details reading the scientific literature on the argument.
If you just want a brief, simplified introduction, read on!

A Step Inside the Physics

where pi is the particle momentum and b=13.6MeV/c. The scattering density λ=1/X0 is proportional to the mass density ρ and the atomic number Z of the crossed material as follows:

As a consequence, the ability to reconstruct a 3D map of the scattering density values of a closed volume under inspection allows to identify high Z, high ρ materials. This can be achieved measuring a large set of muons crossing the volume and scattering inside the enclosed matter. Given this dataset, it is possible to write the probability to have the 3D density distribution λ −−inside the volume as:

where the index i runs over the muons of the dataset of size M. All the probabilities are considered Gaussian and the muon events uncorrelated. Using a maximization procedure it is possible to maximize this probability, obtaining the configuration of densities inside the volume that maximize the probability to observe the acquired data. We use an iterative MLEM algorithm to achieve this configuration. You can take a look at some 3D rendering of the reconstructed density map in the test cases section. 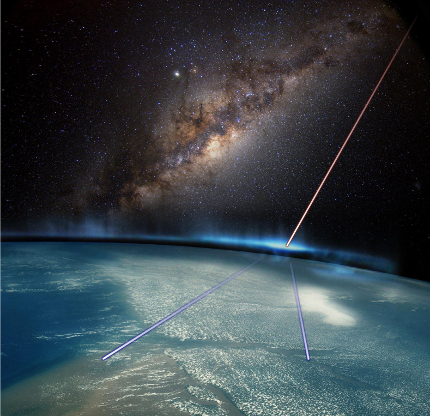 A cosmic ray interacting with the upper atmosphere